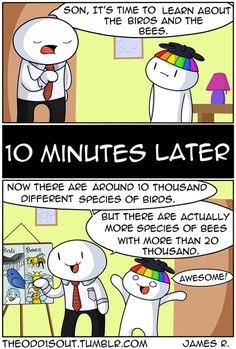 Every parent I know lives in mortal dread of the moment when their children will eventually decide to upturn the humdrum of everyday life with that one question- what is SEX? I am not any different, even though I’m a sexuality educator myself and talk about all sorts of uncomfortable things the same way I’d ask for sugar in my coffee or buy vegetables every morning. But when it comes to one’s own child, all that bravado and confidence just seems to whoosh out of you. You’re very aware of the fact that you’re probably the only person who means the world to your child and therefore, everything that you do and say has a lasting impact on your child’s consciousness. Well no one said it was going to be easy!

And it wasn’t easy. Two days ago, my nine year old son came to me while I was reading and whispered in my ear,”Amma, I need to ask you something, please don’t be mad at me. What is S-E-X?” That is exactly how he said it, spelled out one letter at a time in a low conspiratorial whisper, as if we were discussing where to drop the next nuclear bomb. And it didn’t feel like anything less than an explosion in my head. My first impulse was to run. To wish my little one was a new born again and a long way away from all sorts of grown up things. But I didn’t have that choice. I’d rather have him hear about important and not so important things from me rather than from his friends and Google. It was time to bite the bullet.

My book and phone were put away as I drew my son closer and reassured him that he could ask me anything and I would never be mad but before I answered him, I’d like to know where he came across this word. The story that followed has made me fearful and proud in turns. My son went on to tell me that his partner in school had told him all about sex, rape and f*****g and that he watched videos at home that showed how it’s done and that one of his brother’s friends had told him it’s cool to kiss and have sex and that he loves doing ‘it’. The said child’s brother’s friend is 13. I was horrified! But this was not the time to talk about my child’s partner or what he knew. I had to focus on what I felt my child should know- that sex is a normal adult activity that two grown-ups engage in when they are very close and want to express their love for each other and also when they want to make babies. I told him that sex is meaningful and beautiful only when the two people involved respect and trust each other and are both willing to ‘make love’. Of course he wanted to know exactly HOW it was done and I explained briefly, but my focus was on explaining the act of sex in the context of consent, love, respect and most importantly, adulthood. That brought on more questions of why kids shouldn’t do it and how it’s important to wait till you’re grown up so that you’re safe from infections and all sorts of problems. I tried to avoid talking about contraception because I felt that it wasn’t needed at that time.

Some things can’t be avoided though and I had to go back to what my child’s friend had said about rape and watching videos on his ipad. My son had some idea about rape. He felt that it meant ‘torturing’ girls and that it shouldn’t be done and I had to explain to him that torture, in this case had more to do with forcing sex on somebody and not just hurting them. As for the videos, it was important to talk about how the way sex was shown in videos was not real and that it was not okay for kids to watch stuff like this. He seemed to understand that and told me that he had tried telling his friend that it wasn’t good to watch everything on YouTube and that if his mum found out, he’d be in trouble. But his friend had laughed him off and called him ‘darpok’ and said that no one could stop him from doing what he wanted. I tried explaining that maybe his friend was just curious and needed a grown up to talk to talk to him about his screen habits.

There are a few important things that I learned from this unnerving exchange. I understood the importance of being affirmative and honest with one’s children as it brings you closer to them and they begin to tell you more about how they perceive the world. Over the course of the next few days we had several interesting conversations that ranged from how babies are made, what sanitary pads are used for, where babies come out from and even blood relations, second marriages, step fathers and step siblings. I got so many opportunities to delve into my little one’s curious imagination, his fears, his insecurities and his uncanny ability to understand complex concepts with natural ease. I was offered a wondrous chance to lay down the foundations of one of the most beautiful aspects of creation in the context of love, sensitivity and respect and I took it. I was reminded of the fact that fear is often the beginning of good things.

I also learned first- hand about the dangers of exposing our children to too much before they’re ready to understand contexts and meanings and how kids can often use teasing and shaming as a way of getting their peers to try something new. I was worried and afraid about how naturally the other child had accepted pornography as natural and real when it is anything but that. I felt like I needed to get in touch with the other child’s parents and talk to them about their child’s experiences. It is a risk I am willing to take and only time will tell if it’s the right thing to do.

The most important thing I learned from this whole experience is that when the birds and bees decide to buzz at you, you should buzz right back- cut down all the noise, create a safe space and listen so that you can be heard too.

It's amazing how when you set out to do something that moves your spirit, things just start falling into place and you begin meeting ...

One of the difficult parts of working alongside a friend is that 'work' conversations don't strictly remain in those confines. The joyful part...