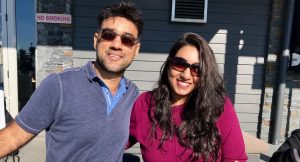 I never really gave the cultural ethos behind the festival of Raksha Bandhan much thought when I was growing up. We celebrated it simply because there was something uniquely tender about a festival that focuses entirely on the bond between a brother and sister, something that isn’t routinely celebrated or discussed. We weren’t very high on the rituals around Rakhi because we didn’t celebrate it for religious reasons. There were never any poojas or ornate gifts but we assembled together and tied colourful threads on our poor brother’s wrist who would be horrified at the garish colours and designs. He hated ornamentation of any kind but for that one day, he submitted grudgingly. The gift was always a small sum of money or a chocolate for each of his three sisters and that was that. Now that we’re so far away from each other, even that tradition has discontinued and we get by with sending cheesy bhai-behen songs to our brother on Rakhi. But the memory of the many Raksha Bandhans celebrated together remain as dear as ever.

Rakhi is imbued with so many cultural and historical nuances but there’s one aspect that is much discussed in activist circles and often actively criticised/discouraged- that of the role of the brother as a protector and the oblique reference to the supposed incapability of women to protect themselves. I don’t wholeheartedly agree with the rejection of a culturally significant and warm festival on these grounds. And also because there are a host of other cultural references to Rakhi other than the protection offered to sisters in lieu of a scared thread. But it does make you wonder about the effects of roles that are socially defined and imposed through the medium of gender on interpersonal relationships and in this context, on the relationship between brothers and sisters.

In most Indian families, boys are brought up with this forced idea that they must protect their sisters from any harm and that often translates into them limiting, controlling, and exercising power on the choices that a sister might make, choices that might seem ‘dangerous’ to a brother. This is part of how patriarchal notions of the male as a stronger, more capable being are fed into parenting methods where very often, especially in the Indian context, clear boundaries are laid to distinguish expected behaviour from children of different sexes. One of the ways these distinctions manifest, apart from the usual distinctions of clothing and career choices, is power imbalance in a brother sister relationship where a sister feels that she has no right to decision making about her own life, therefore creating a sense of restriction, suffocation and resentment towards the brother. As it is, girls in Indian households have much to contend with when it comes to their choices.

On the flip side, with the role of the protector thrust upon them, coupled with other damaging notions of toxic masculinity that prohibit displays of emotion and sensitivity, boys often feel pushed into a box where there is no room for them to share their vulnerabilities, anxieties or fears in a sibling relationship because they live with this overwhelming sense of sisters being delicate and given to weakness. Put these two enforced identities together- that of the weak sister and the macho brother- and you get something that could do with a lot of warmth, openness, encouragement and equality. Clearly not a relationship that exhibits equal exchanges of advice, support and protection- both physical and emotional- for both the parties involved.

I have had many differences with my parents but not enforcing any gender roles upon us is something I will always be grateful to them for. My brother is the eldest, followed by three sisters. The role of the big, strong protector and enforcer of boundaries should have come naturally to him, but because our parents raised us in a way where each of us was responsible for the other, where roles were assigned not according to gender but capability, he never really fit that bill. What he became instead was a loving, helpful sibling who did not shy away from helping with household chores, who never told us where to go or what to wear (except for enforcing a ban on the colour yellow for a few years. I still hold him accountable. He has apologised alright.) never told us what to do and what not to do (except study and not watch too much chitrahar, but that’s good advice.) and most of all, treated us as his equals. We were present for each other, we protected each other and still do, despite the many thousands of miles that separate us. And most of all, our brother never felt shame or awkwardness in sharing his pain or discomfort with us. He was never ashamed of being emotional in front of us simply because he was never shamed for being that way by our parents. And we were never taught to be in awe of him because he was our brother, but were expected to respect him simply because he was older and responsible. We were encouraged to be a safe space for each other- to express our fears and sadness, to share our joys and seek advice. I do believe that is the case in most sibling relationships as far as the care is concerned but I have my concerns about sibling bonds being a safe space for men to seek protection in, given the man box of invincibility that most Indian men are conditioned to fit into. 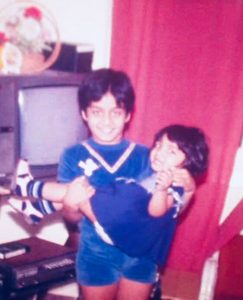 If there’s anyone who did more overt protecting and controlling, it was my older sister! She was the one in charge of our collective decision making as siblings. One could argue that this has a lot to do with personality types. Maybe that’s true because my brother has always been quiet and dignified and my older sister was born boss lady and mother hen rolled into one. But that’s what makes our childhood experience as siblings even more unique- we were allowed to function and behave as a unit with tasks and responsibilities allotted to each according to their personalities and skills and NOT gender. It liberated us to be who we were. I could be the geeky reader who actually liked cleaning bathrooms but hated social gatherings and my younger sister could be the smooth talking PR person who was good at everything. My older sister could be the caretaker and head of the household because that’s what who she was, more than my mother. And my brother was an overseer of sorts who made sure everyone had done their homework and wore slippers and didn’t watch too much TV, not because he was our brother but because he was older and the most principled of us all.

I do believe that not enforcing gendered/cultural notions of boys being stronger and girls being weaker and therefore somehow less capable, creates a more equal, giving bond between siblings. We’re living proof of that. My heart swells with pride when I visit my brother’s house. He maintains the sense of equality he was brought up with in his relationship with his wife and children. He cooks, cleans and manages the household and children along with his wife. They’re equal partners. Much like we were in childhood. Each sibling is sought out for advice and help on the basis of their ability, and not gender. So Bhaiya is the expert on medical matters, Sister 1 finds out solutions to the trickiest family situations, Sister 2 is the person you go to when you need practical money/career advice and I’m the family cuddle bag/babysitter who generally hogs up everyone’s attention and care also. Each protects the other and if there’s something we don’t like about each other, we share from a position of concern, not authority. Authority and subordination is best left in schools and offices (maybe not even there.) Within a family, everyone is entitled to equal protection and care because families should be safe spaces for everyone- both boys and girls.

pics- the author and her brother.